From Ladybugs to the notorious boll weevil, beetles are known for their voracious appetites calling for beetle control. The diets are as varied as their shape and species. Beetles are found almost everywhere in the world except for the polar and marine regions. Comprising nearly 40% of the world?s insect population, which accounts for nearly 400,000 beetle species within the insect world. It is not surprising how often a beetle infestation can grow from a minor inconvenience to a catastrophe requiring beetle extermination.

A Beetle?s diet varies depending on their environment and species 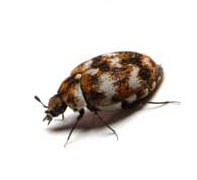 Some beetles such as the Ladybug or Ladybird beetles actually help control the populations of the scale insect, thrip, and aphid, which attack and eat our agricultural crops and garden flowers. Yet the red flour beetle, cowpea beetle, boll weevil, mungbean beetle, and Colorado potato beetle destroy crops causing severe damage if proper beetle control is not established. Other beetles just feast on decaying animal and plant, fungi or waste material like the dung beetle. When not controlled Japanese beetles enjoy destroying flowers and entire fruit harvests. Like the death-watch beetle, many beetle?s larvae is known to eat and bore into the timber of buildings. It can destroy a building?s structural integrity, For the death-watch beetle, early identification and beetle extermination can destroy the larvae to avoid this type of damage.

Is it a cockroach, or a beetle?

It is all in the wings. The majority of beetles have a long line down their backs, which separates their two sets of wings. A beetle?s top wings appear to be firm and give the appearance of a hard shell, protecting them from adversaries and the possibility of dehydration while in the elements. The underlying wings are what most beetles use for flying. Some beetles like the click beetles have long backs, but some are round like the Ladybug and June bug. A beetle?s mouthparts and antennae are distinct from the rest of the body and well-built compared to the cockroach.

Controlling the Beetles in your environment

Beetles usually lay their eggs near sources of food for their young. When the young beetle hatches, it is in the form of larvae. The larva many times is the cause of the destruction of crops, food, clothes, and wood products. If a beetle infestation is suspected, closely inspecting the infected area is suggested in early fall or early spring. A professional can assist with beetle extermination.

In the home try to:

In the Garden remember to look for:

Both in the home and garden to prevent a beetle infestation, it?s important to clean out old wooden furniture, fabrics, and food products to deter these insects from taking over. It?s not unusual in the fall as the evening temperatures drop here in Nevada for insects to make their way into the home to avoid the chill of the approaching winter season. Call Ace Pest Control today to help with beetle extermination and prevention; our technicians they will know exactly where these insects are hiding. Careful inspections and maintenance practices can curtail their chance to overtake the home.