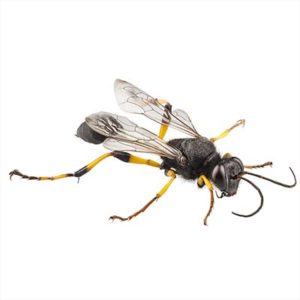 These wasps get their name from the nests that they build beneath awnings, sidings, and roofs using mud balls. Sometimes they also get into garages and sheds, which can become troublesome for homeowners for many reasons. These wasps do not construct nests and live together in large groups since they are solitary. There is a variation of Mud Dauber wasp species within Nevada, but generally, they are long and thin. Some variations have a blue or black color, while others have yellow markings across their bodies. You?ll know when you have seen a mud dauber wasp by their middle thread, which connects their back and stingers to the front of their bodies. The mud nests that these pests construct and use depend on their variation. Whereas black and yellow mud daubers build circular compartments and then cover them, black ones build nests, which are reminiscent of pipe?organs.